Why Leeds? This is the £69 billion question …

Leeds is an exciting city in which to do business: it’s one of the fastest growing cities in the UK and has a local economy that is worth more than £69 billion, so it’s no surprise that organisations are eager to be part of its thriving business epicentre.

It is the leading city in the Northern Powerhouse region, which also includes Greater Manchester, Liverpool city regions and Sheffield, and is a prime location for financial and professional services, which are key strength sectors in the region, alongside healthcare and life sciences, as well as creative and digital technology sectors.

It is the UK’s second centre for banking, employing 28,000 people, and it is home to Lloyds Banking Group and First Direct, as well as the headquarters for three building societies – Yorkshire, Skipton and Leeds.

The Big Four accountancy firms, PWC, EY, KMPG and Deloitte, also have a significant presence here, while Leeds has grown to become the country’s second largest legal hub outside of the capital.

Creativity is another key driver of Leeds’ economy: it’s home to Channel 4, which opened its new headquarters in the city in 2021, after beating bids from Birmingham and Manchester when it announced its relocation plans. Sky’s Digital & Technology Services Campus employs hundreds in Leeds, too.

Health is another huge employer, with the NHS having four national offices in the city, including NHS England, and globally significant data platforms including EMIS and the Health and Social Care Information Centre (HSCIC).

With rapid growth comes targeted development and investment – the city centre office market is growing rapidly, too, to accommodate businesses that want to be part of this thriving city. According to Deloitte’s Leeds Crane Survey 2022 more than 860,000 sq ft of office space was being built in 2021 – more than double compared to 2020.

Data from the Leeds Office Agents Forum (LOAF) also showed that office take-up was strong in 2021, with 202,543 sq ft of city centre office space deals being recorded in the third quarter of 2021. 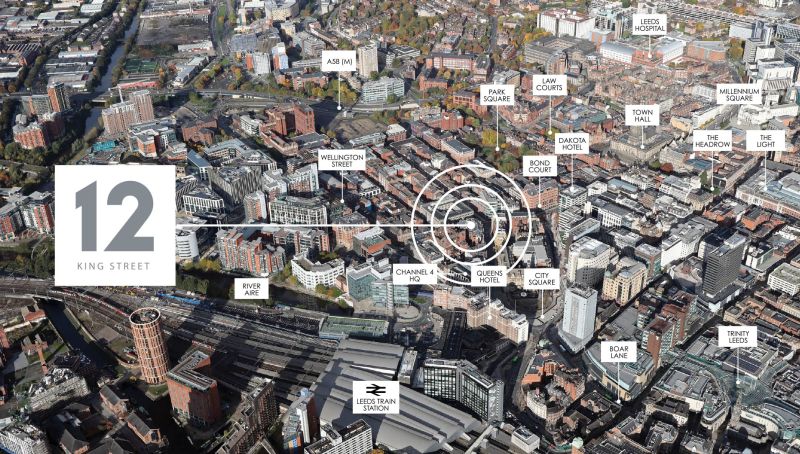 12 King Street is excited to be part of Leeds’ evolution.  As the only new office building in the Leeds Central Business District, it provides 54,368 sq ft of Grade A office space over seven floors – with typical floor plates of about 8,000 sq ft.  – this newly refurbished office space offers Grade A, This sustainable space in the heart of the city centre is proud to be part of the successful Leeds Business District, which is the biggest of its kind outside of London, with 648 businesses paying a levy. 90% of the levy is invested into the BID area and another £14 million will be invested in Leeds up to 2025, thanks to the continued commitment of levy payers to support the BID.

If you want to be based in the heart of the Leeds Business District, see here for more details on 12 King Street.